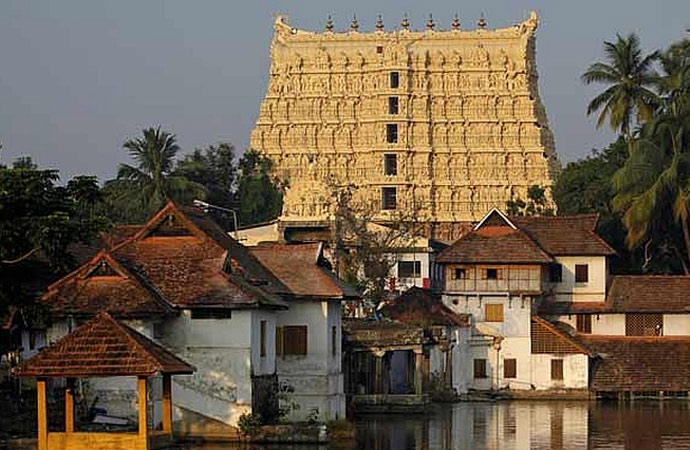 This temple with Lord Vishnu as its principal deity, is located in Thiruvananthapuram. It is known for its architectural excellence. The erstwhile Maharajas of Travancore offered prayers at this splendidly carved temple. The Padmanabhaswamy temple, also known as the Sri Padmanabhaswamy temple is a famous Hindu temple of Lord Vishnu, located inside the Fort in the city ofThiruvananthapuram, Kerala, India. The temple is one of the 108 divya desam, the holiest abodes of Lord Vishnu. The main deity, Padmanabhaswamy, is a form of Vishnu in Anananthasayanam posture (in eternal sleep of yognidra).This is an ancient temple and the city of Thiruvananthapuram derives its name from the name of the presiding deity enshrined in the temple. In older days Sree Padmanabha Kshetram and its properties were controlled by powerful lords known as Ettuveetil Pillamar under the guidance of Ettara Yogam. Later, Marthanda Varma defeated the Pillamar and his cousins “Kunju thampis”, took over power.

The last major renovation of the temple was done by King Marthanda Varma, Maharajaof the erstwhile princely state of Travancore. He dedicated his kingdom to the deity, and pledged that he and his descendants would serve the kingdom as Padmanabha Dasa, meaning “servants of the Lord Padmanabha”. With this, Sri Padmanabha became the nominal head of the state of Travancore, assuming the title Perumal, the Emperor. The British Government saluted the Lord with a 21-gun salute, a military tradition of colonial days, which was continued by the Indian Army until the abolition of the privy purses by Government of India with Indira Gandhi as the Prime Minister.

The royal insignia of the Lord, The Valampiri Shankhu or dextral conch-shell, served as the State emblem of Travancore and even continued so for some time after the re-organization of the States. Sri Padmanabha is still regarded as regional deity of Travancore[citation needed]. The two annual festivals of the Temple culminate in a grand procession, in which the three deities (Sree Padmanabha, Narasimha Swamy andKrishna) are carried on flower-deck and aesthetically decorated Garuda Vahanas to the Shankhumukhom beach, for ‘aaraattu’ (sacramental ablution). The ‘aarattu’ days are declared as local public holidays in Thiruvanathapuram. The Idol is maded of Kadusarkkara Yogam, an ayurvedic mixture, with Lord Vishnu sleeping on Anantha with his head pointing towards south and facing east.